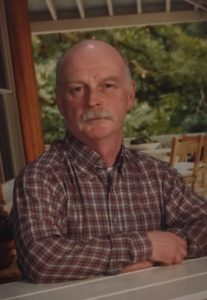 Terry R. Thompson, 69, of Lincoln, died at home on Sunday , July 10, 2016 after a short but courageous fight with cancer. His companion of 23 years, Janielle Bunner was by his side.

Cremation rites have been accorded. A memorial gathering will be held Thursday, July 14, 2016 from 9:30 AM until 10:30 AM at Jefferson Street Christian Church. Memorial services will follow at 10:30 with Pastor Michael Mallick officiating. Burial will be at a later date. Holland Barry & Bennett Funeral Home has been entrusted with his care.

Terry was born November 3, 1946 in Lincoln, IL., the son of Raymond and Alberta (Nance) Thompson. He was a graduate of Lincoln Community High School and Lincoln College. He served in the United States Army from 1966-1968. He was a member of the American Legion Post 263 and Jefferson Street Christian Church. Terry worked at Lehn and Fink, construction at Clinton Power Plant, Elkhart Mine, and Lincoln Elementary School District 27. After retirement from District 27 he went to Lincoln College to work Grounds Maintenance and then moved over to the new Lincoln Center Building until his second retirement in January of this year. He made many friends throughout his life and would entertain them quite often in his favorite spot “his garage”. Taking care of and roaming around the yard were Terry’s favorite things to do. He thought of it as his ranch. Terry will be greatly missed by all those who knew and loved him.

He was preceded in death by his parents and grandparents Orville and Emily Nance.

Memorial donations may be made to Jefferson Street Christian Church or to Memorial Home Hospice.