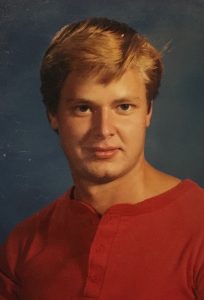 Visitation will be from 11 AM until 1 PM Thursday, July 28, 2016 at Holland Barry & Bennett Funeral Home in Lincoln. Funeral services will b at 1 PM Thursday also at the funeral home with Father Laible officiating. Burial will follow in Holy Cross Cemetery.

Todd was born March 18, 1965 in Lincoln, IL., the son of Stephen and Diana (Donnan) Purdue. He attended Carroll Catholic School and graduated from Lincoln Community High School in 1983.
Upon graduation Todd enlisted in the United States Air Force. He served from 1983-1987. He then served in the National Guard for 13 years. While in the service Todd obtained two electrical engineering degrees from Missouri Central College in Warrensburg, MO. He was an Ordinance Disposal Specialist and a certified helicopter mechanic. He excelled in the military and received numerous certifications which allowed him to be in Officer Candidate School. Todd enjoyed being with his family, fishing, and helping others.

Memorial donations may be made to the family in care of Stephen Purdue and will be accepted at the funeral home.