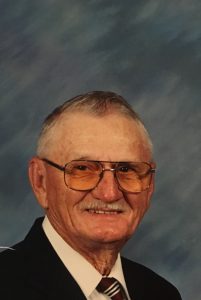 Cremation rites have been accorded by Holland Barry & Bennett Funeral Home, Lincoln. Graveside services will be held Saturday, September 17, 2016 at 12:30 PM at Laenna Cemetery, Chestnut with full military rites provided by American Legion Post 263. A time of visitation will be held from 2-4 PM Saturday, September 17, 2016 at Zion Lutheran Church, Chestnut. Memorial services will follow at 4 PM Saturday, also at the church with Pastor David Dunlop officiating.

He was a member of the Chestnut United Methodist Church; the Lin-Pro square dance club; and the American Legion Post 848. He proudly served his country in the United States Army during WWII and was stationed in Sweden and England. He was a former milk man at Meadow Gold Dairy in Decatur. Wayne farmed in the Chestnut/Beason area. He was a former member of the Logan County auxiliary police force. He was a skilled woodworker, making treasured gifts for his family.

He was the father of Carol Ann (Wes) McCoy of Champaign, IL. and Martha Irene (Dean) Sasse of Atlanta, IL. In addition to his children he is survived by grandchildren Diedra (John) Stewart of Mt. Pulaski, IL.; Kurtis (Laura) Cowgur of Mooresville, IN.; Heather (Scott) Martin of Atlanta, IL.; and Allen (Heather) Sasse of Beason, IL. His great grandchildren include: Emma, William, and Paige Stewart; Chloe, Corinne, and Wayne Cowgur; Lauren, Erin, and Jordyn Turner; and Tyler and Peyton Sasse.

He was preceded in death by his parents and his beloved wife Opal.

Memorial donations may be made to the Chestnut United Methodis