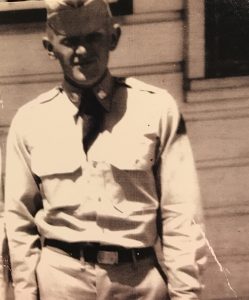 Wayne Denney Sr., 84, of Lincoln, passed away January 8, 2016 at home with his loving wife. Graveside services will be held at 11 AM Wednesday, January 11, 2016 at New Union Cemetery. Military rites will be performed by the American Legion Post 263. There will be no visitation. Holland Barry & Bennett Funeral Homehas been entrusted with his care.

Wayne was born October 13, 1932 in Lyons, IL., the son of Leo and Adeline Denney. He married Esther McBenge on July 5, 1955 in Shelbyville, IL. He proudly served his country in the United States Army. Wayne was formerly employed at Caterpillar, spent more than 20 years at PPG, and was briefly employed at Friendship Manor. He enjoyed fishing. He was a simple man and enjoyed time with his family. Surviving are his wife Esther Denney of Lincoln; his children: Kathleen (Steve) Twente of Springfield; Wayne Denney Jr. of North Vernon, IN.; Terry Lee Denney of Lawndale., Deborah Kay Denney of Lincoln; and Scott (Debra) Denney of Oakland City, IN; several grandchildren and great grandchildren also survive. He was preceded in death by his parents, his brother Lee James Denney, son Daniel Denney, and grandson Chad Twente. Memorial donations may be made to St. John United Church of Christ.