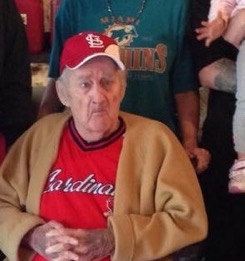 Service: Wednesday at 7 p.m. at the funeral home

Visitation will be held from 6PM until 7 p.m. Wednesday, January 14, 2015 at Holland Barry & Bennett Funeral Home in Lincoln. Memorial services will be at 7 p.m. Wednesday also at the funeral home with Pastor Larry Crawford officiating. Cremation rites have been accorded and burial will take place at a later date.

Surviving are his daughter Ann (Keith) Coleman of Lincoln, and his sister Nancy (David) Poole of Emden. He is also survived by two grandchildren and four great grandchildren.

Mr. Elkins was employed at PPG for 25 years.

He was preceded in death by his parents, his wife Betty, his son Michael D. Elkins, his brother Robert Elkins, and his sister Peggy Coady.

Memorial donations may be made to the American Cancer Society or to the Alzheimer’s Association of America and will be accepted at the funeral home.