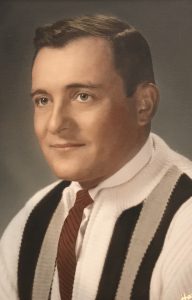 At his request, cremation rites will be accorded by Holland Barry & Bennett Funeral Home and private family interment services will be held at Richmond Grove Cemetery, New Holland.

Bill was born September 12, 1931 in New Holland, IL., the son of William McKinley LaForge and Bertha (Straub) LaForge.  He married Sonja Weller on February 14, 1965 in Mt. Pulaski, IL.  He began farming on the family farm at a young age.  After his service in the United States Army during the Korean War, he and his twin brother Wayne began farming independently.  In 1987 Bill accepted the position as manager at Kickapoo Creek Park where he served for many years until his retirement.  After retiring he devoted his time to helping anyone in need, including continuing to lend a hand on the family farms.  He was once active in the International Twins Association where he and Wayne acted as co treasurers and co presidents.  He was a member of the New Holland Methodist Church where he served as a Lay Person and acted as the chairman for the district.

He was preceded in death by his parents, daughter Jade LaForge, sister Margaret Parr, and brother David LaForge.

Memorial donations may be made to the Logan County Parks and Trails Foundation at PO Box 11 Lincoln, IL  62656.