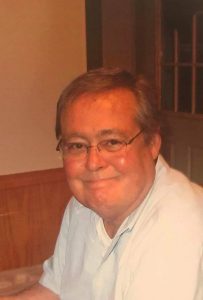 William Harvey Van Pelt, 71, died at St. John’s Hospital on Thursday, May 17, 2018. He was born March 9, 1947, son of the late Harvey C. and Anita Stahl Van Pelt of Elkhart,IL. Bill graduated from Tri-City High School in Buffalo, IL. and from St. Louis College of Pharmacy, following in his father’s footsteps as a pharmacist. The late James Farrell,R.Ph. was Bill’s mentor and was instrumental in encouraging Bill in his pharmacy career. Bill worked for Rexall Drugs and was manager of the Decatur, IL. location. He was a pharmacist at Memorial Hospital ( Medical Center), St. John’s Pavilion Pharmacy, and Doctor’s Hospital in Springfield for most of his 40+ year career. Later he was a pharmacist at several Central IL pharmacies, in Beardstown, Springfield ( the Medicine Shoppe), and Fairbury ( Sav-Mor), both full time and part time. Bill was a service oriented people person and sincerely cared for his clients and colleagues everywhere he worked. He had a lifelong interest in photography and in aviation. Before becoming a father, he had his pilot’s license and flew small, private aircraft. He was an antique car enthusiast.

He was preceded in death by his parents and his infant son, Benjamin. He is survived by his son William Adam Van Pelt ( Sarah) of Buford, GA., his grandson Jacob, and his sister Virginia Van Pelt of Elkhart; his aunt Carol Stahl of Albuquerque NM, his aunt Priscilla ( Pat) Johnson of Mattoon, IL, and many beloved cousins in IL, OK, and NM.

Funeral services will be held Wednesday, May 23, 2018, at 11 AM at Elkhart United Methodist Church with visitation one hour prior to the service. Burial will follow in Elkhart cemetery.

In lieu of flowers, memorial gifts may be made to Elkhart United Methodist Church, Box 112 Elkhart, IL. 62634.