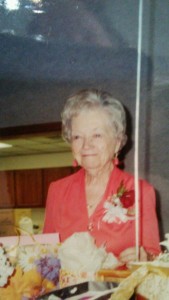 Visitation will be at 10 AM Wednesday, February 3, 2016 at Holland Barry & Bennett Funeral Home. Funeral services will follow at 11 AM Wednesday, also at the funeral home with Wilma’s grandson, Steven Dunham officiating. Burial will follow at Cline Cemetery, Broadwell, IL.

Wilma was born July 29, 1913, the daughter of Leslie Ridgeway and Teanie M. (Judy) Ridgeway. She married Charles W. Dunham. He preceded her in death in 1967. She later married Francis Leroy Brown. He preceded her in death in 1984. Wilma was a member of Broadwell Christian Church where she served in the ladies ministry and several other ministries.

Memorial donations may be made to Broadwell Christian Church and will be accepted at the funeral home.