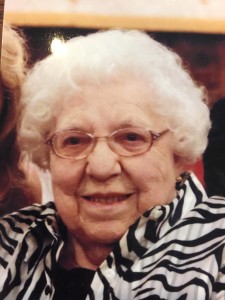 She was born to William Towles and Ruby Towles Gandy (Mosier) November 14, 1925 in Logan County, IL.

Services for Wilma will be held at the First Cumberland Presbyterian Church, Saturday, August 15, 2015 with visitation from 9-11 am. Funeral to follow visitation services at 11 am. Pastor Steven Blaum and Pastor Joe Snider will be officiating. Burial will be at Richmond Grove Cemetery.

Holland Barry and Bennett Funeral Home has been entrusted with her care.