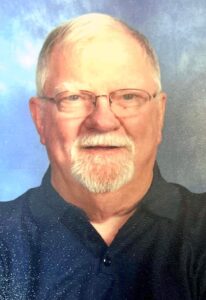 Garry Allen Whittaker, 78, of Riverton, passed away December 18, 2022, at Memorial Medical Center.
Visitation will be from 10 AM until 11 AM Wednesday, December 21, 2022, at St John’s Lutheran Church, Hartsburg. Funeral services will follow at 11 AM with Pastor Stephen Goodwin officiating. Burial will be in Hartsburg Union Cemetery with military rites performed by the Lincoln American Legion post 263. Holland Barry & Bennett Funeral Home is assisting the family.

Garry was born June 17, 1944, in Lincoln, IL., the son of Alfred and Mildred (Wiebers) Whittaker. He graduated from Hartsburg Emden High School in 1962. Garry proudly served his country in the United States Army during the Vietnam era from 1967-1969. He was a dog handler for the Military Police. He married Antoinette “Toni” Kazakaitis August 31, 1969. She preceded him in death February 7, 2005.
He found love again and married Gloria (Aper) Hermes November 10, 2018.

Garry retired from Caterpillar as a supervisor after 40 years of service. He worked part time at Holland Barry & Bennett Funeral Home for 8 years. He was a lifelong Lutheran and was a member of Good Shepherd Lutheran Church in Sherman. He was a gentle giant with a strong faith and a big heart. He was a member of the American Legion Post 263, the VFW Post 1756 and a past Lincoln Elks 914 member. He enjoyed camping. He loved traveling to McAllen, Texas with Gloria for the winters. They made many memories and friendships on those trips.

Survivors include his wife Gloria Whittaker of Riverton; granddaughters Alisa Whittaker and Breanna Whittaker; brother Melvin Whittaker; and his extended family of stepchildren Christy ( Mark) Stephenson and Kevin (Angela) Hermes , step grandchildren, and step great grandchildren whom he loved as his own.

He was preceded in death by his parents, first wife “Toni” Whittaker, son Daron Whittaker, and beloved dog Katie.

Memorial donations may be made to St. John’s Lutheran Church.