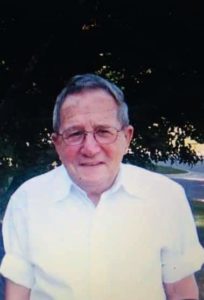 Donald retired from GTE after 25 years pf service. He proudly served his country in the United States Navy during the Korean Conflict. He was a member of the American Legion Post 715 in New Holland. Donald enjoyed hunting and fishing with his son and was an excellent wood crafter.

He was preceded in death by his wife, daughter Brenda Martin, and brothers William Cooper and Robert J. Cooper.

Memorial donations may be made to the American Cancer Society.