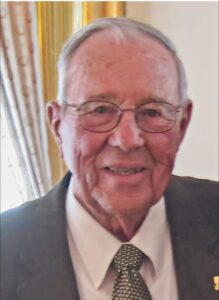 Dale was born on April 15th, 1927, in Alpha, IL to Charles and Lottie (Anderson) Spore. Dale served in the United States Marine Corps during WWII. After returning home from the Marine Corps, Dale attended the Midwest School of Building Trades in Bloomington, IL. This was the start of his 17 year career with Alexander Lumber Company in Galesburg, Pittsfield, and Lincoln, IL. It was in Pittsfield that Dale met his wife Marian (Rector). They were married in Quincy on June 30th, 1955. Dale began working for Myers Industries in 1966. During his career at Myers Industries/MII, he managed the installation department and became one of the owners of the company until his retirement in 1989.

In his retirement, Dale had the wonderful opportunity to do what he enjoyed most – woodworking, fishing, and golfing. Most who knew Dale saw the product of his woodworking and easily recognized him as a true craftsman. Dale mostly fished for bass or bluegill at a family friend’s lake near Lincoln, but once a year, for several decades, Dale would go with friends to Northern Ontario to fish for walleye and northern pike. Nothing could compare to a shore lunch with fried walleye that had been swimming only minutes before. A great golfer, Dale was known to have shot his age or better every year from his early 70’s to 93.