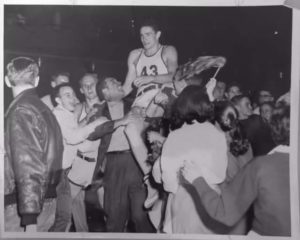 David Lee Cadwallader, 81, of Lincoln, passed away April 4, 2019, at Grace Point Center with Lincoln Christian Village. Cremation rites were accorded by Holland Barry & Bennett Funeral Home. Graveside services will be held May 18, 2019 at 9:30 AM in New Union Cemetery with Pastors Michael Mallick and Ryan Edgecombe officiating.

Mr. Cadwallader was raised in Lincoln and graduated from the University of Illinois. After achieving a masters degree he was a coach and teacher at the Michigan School for the Deaf in Flint, MI. from 1956-1961; was Supervisor and General Supervisor of Production, Superintendent of Material and Production Control, and Supervisor of Manufacturing at Chevrolet Engine Plant, Flint, MI; and former Project Coordinator at Romulus Engine Plant in Romulus, MI. prior to his retirement in 1991. In more recent years he occasionally worked as a substitute teacher in the Lincoln school system.

The family welcomes anyone who would like to attend service.
Memorial donations may be made to Jefferson Street Christian Church, Memorial Fund for David Cadwallader