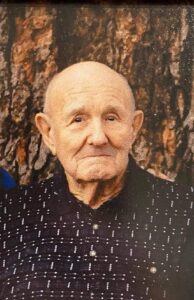 Cremation rites have been accorded by Holland Barry & Bennett Funeral Home. No services will be performed at this time, but a joint celebration of life will be shared at a much later date.

Delas was born on St Patrick’s Day in 1927 in Lincoln, Illinois; the son of Edgar and Marie (Laun) Johnson. He grew up on a farm near Middletown, Illinois. He recognized the love of his life, Wilma Jean Boward, when her 8th grade class visited his high school. They were married March 12, 1949. He served in the United States Army from 1950-1952 during the Korean War as a mess hall sergeant as well as a pilot, flying domestic routes carrying blood and other supplies from Fort Leonard Wood. Serving domestically meant he could live with his wife on the base. As a farm boy, he understood the basics of veterinary medicine, so when sent to medical officer’s training he did well. He considered a career in the Army, but when his father in law offered some land, he returned to Middletown with Jean to farm.

On the farm, they primarily raised corn, soybeans, and beef cattle. They also raised two daughters, Cathy and Connie. In the early years of farming, when not planting or harvesting in the off seasons, Grandpa and a brother in law drove a truck coast-to-coast for United Van Lines – High Value Division, serving customers like IBM during that exciting time that started the Information Age. Later, he ran his own D7 Caterpillar bulldozer to build ponds, rebuild levees, clear land, and level structures. Delas also served as a Sunday School teacher at Middletown Methodist Church for 17 years. He was also on the Menard County Farm Bureau Board, the New Holland Middletown School Board, and was a 4 H Leader.

Delas and Jean retired from farming in 1998, though they continue to own the land. The land was cash-rented, but a retired farmer can’t stay idle, so he continued to help his tenant. Jean continues to live on the property. Delas spent his last years at Copper Creek Memory Care Unit in Lincoln, IL.

He was preceded in death by his parents and his brother, Rudy Johnson.

Memorial donations may be made to Middletown Methodist Church.