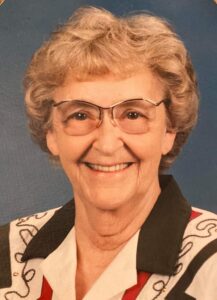 Visitation will be from 10AM until 11AM Friday, October 16, 2020 at Holland Barry & Bennett Funeral Home. Funeral services will follow at 11AM. Burial will be in Zion Cemetery, Lincoln.

Gaila Ruth Sherwood (Ewers) was born April 30, 1925 and grew up in rural Viroqua, WI. Adventurous and spunky by nature, she went west to California during World War II and became a Rosie the Riveter to support the war manufacturing effort. She returned to Wisconsin after the war and studied to become a hair dresser, later being asked to open up a hair dressing school in Lincoln, IL.

Upon coming to Lincoln, IL she met the love of her life Russel Sherwood and never looked back. She was actively involved in the community her entire life. She remained a hairdresser into her 80’s, treasured her service and Sunday School teaching at the First UMC of Lincoln, was a surrogate gramma to many at Lincoln College while working in the library and later was a passionate supporter of the Humane Society of Logan County where she was matched up with her beloved Bobo. Gaila had a fire for life and infectious personality that brought joy and amusement to so many, and she will be greatly missed.

She was preceded in death by her husband Russel, son Steven, and brothers Franklin and Albert Ewers and her sister Jean.

In lieu of flowers, memorial donations may be made to the Humane Society of Logan County.