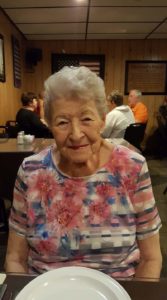 Cremation rites have been accorded by Holland Barry & Bennett Funeral Home. Burial will be at a later date in Irish Grove Cemetery.

Dorothy worked for Franklin Life Insurance Company and later for Sears. She was of the Lutheran Faith.

Memorial donations may be made to the American Heart Association.