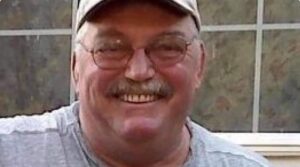 Doug was born October 22, 1957 in Monticello, IL., the son of William “Bill” Shumard and Jacqueline “Jackie” Brown.
He worked at Greyhound Lube for several years and formerly worked at Sears. Doug had a strong work ethic. He was an avid sports fan, especially the Cubs, Fighting Illini, and the Bears.

He was preceded in death by his father, wife Wendy Shumard, and brothers Darrell Brown and Kevin Shumard.