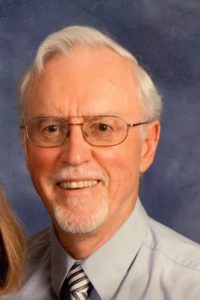 He was born on January 7, 1941 in Mason City, Iowa, the son of Glea Harold and Mavis Ouverson Hall. He married Cheryl Thompson on July 22, 1967 in Marshall, IL.
He was preceded in death by his parents and by one brother, Eugene Hall.
Surviving him are his wife, Cheryl Hall of Lincoln; his daughter, Stephanie Hall also of Lincoln; his son, Nathan (wife, Megan)Hall of Portland, Maine; his granddaughter, Catherine; and one brother, Brian (wife, Coralene) Hall of Clear Lake, Iowa. He is also survived by one sister-in-law, Theda McMinn, and many nieces and nephews.
He was a graduate of Milligan College in Tennessee (B.A. in Religion), Lincoln Christian Seminary (M.Div. in Old Testament), Gordon-Conwell Theological Seminary (Th.M. in New Testament) and Union Theological Seminary (now Presbyterian Theological Seminary) in Richmond, Virginia where his earned his PhD in Old Testament.
Dr. Hall was a scholar and a professor of Old Testament. He taught Old Testament and Bible Doctrine at Kentucky Christian University in Grayson, KY from 1972 until 1986. The last five years at KCU he also served as Academic Dean where he started their Teacher Education program and successfully initiated and achieved accreditation for the college. In 1986 he was called to Lincoln Christian Seminary in Lincoln, IL as Professor of Old Testament and Hebrew until his retirement in 2012. Upon retirement he was awarded the title of Professor Emeritus at LCU. Dr. Hall taught an estimated 4,000 students over his 40-year career in higher education. His students serve as ministers, scholars, professors, teachers, church workers, and missionaries all over the country and the world.
He was a lifelong servant of the Lord serving at various times as a youth minister, preaching minister, deacon, youth sponsor, small group leader, Bible study teacher (over 40 years), and elder (almost 30 years). He was a member of Lincoln Christian Church and most recently served there as an elder and Adult Sunday School teacher. He received the Restoration Award for Christian Higher Education from LCU in 2012 and the Stone-Campbell Journal Lifetime Achievement Award in April of 2019.
He wrote many scholarly articles and chapters for publication as well as teaching material. He wrote a commentary on the book of Deuteronomy published by College Press in 2000. He is the author of a forthcoming commentary on Jeremiah and Lamentations.
He was an avid traveler. He was proud to have visited all 50 states. He visited 31 countries around the world including leading two study tours to Israel in 1995 and in 2004. He wasalso a voracious reader. Upon retirement, he donated his extensive personal library of theological books and Bible commentaries to Lagos Christian College in Lagos, Nigeria. It remains the only library available in that city. He was also an avid gardener for decades, planting organic vegetable gardens in every place that he lived.

Dr. Hall loved God, his family, and the church. He was a man of wisdom, humility, and integrity who will be greatly missed by his family, church, and community. He has left behind a legacy that will far outlive him.
Memorials may be made to the Dr. Gary Hall Endowment for Old Testament Studies at Lincoln Christian University, Lincoln, IL.