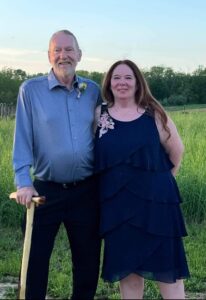 Jack Rodney Merreighn, 67, of Lincoln, passed away December 1, 2022, at Memorial Medical Center with his family by his side.

Visitation will be from 5-7 PM Tuesday, December 6, 2022, at Holland Barry & Bennett Funeral Home. Funeral services will follow at 7 PM. Casual dress is requested.

Jack was born December 29, 1954 in Moline, IL., the son of Francis and Clara (Smith) Merreighn Jackson. He married Roberta O’Connor on June 7, 1972. They shared 50 years of marriage and a lifetime of friendship. Jack loved music and spent nearly half of his life going to concerts. He could sit and talk for hours with friends, acquaintances, and strangers alike. He was known to drive his lawnmower all around the neighborhood visiting and checking up on his neighbors. Jack was a community activist. He loved helping his community and partnered with many different organizations and community members to make Lincoln the best it could be. He was an avid Chicago Bears fan. Jack was also a history buff and loved antiques. He was a loving, sharing, kind, caring father and grandfather. He attended Lincoln Christian Church and had a strong faith. He will be greatly missed by all who knew and loved him.