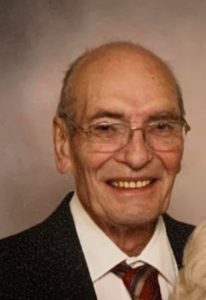 Lawrence W. Sampson, 81, of Lincoln, passed away Saturday, March 2, 2019 at his home.
Cremation rites have been accorded by Holland Barry & Bennett Funeral Home. There will be no services at this time.

Lawrence was born January 12, 1938 in Lincoln, the son of Jess and Nona (Shelton) Sampson. He proudly served his country in the United States Army. He married Mary Wiggers on July 28, 1961. She preceded him in death on July 7, 2013. He retired from the Box Factory after 46 years of service. Mr. Sampson was a member of the American Legion Post 263,VFW Post 1756, and the Eagles Lodge 2708. He enjoyed fishing, gardening, loved his beagles, and was a steel guitar musician for most of his life.

Memorial donations may be made to St. Jude’s Children’s Research Center.