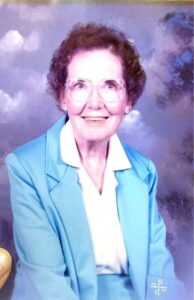 Marjorie Ruth Hawes, 97, of New Holland, passed away December 3, 2020 at The Christian Village.

Marjorie was born May 19, 1923 in Atlanta, IL., the daughter of Carl Curtis Hawes and Ruth (Mountjoy) Hawes.
She attended grade school and high school in New Holland, IL. She then studied at Illinois State University for 2 years and Moody Bible institute in Chicago for 3 years. She had 1 year of nurse’s training in New York. Marjorie became a missionary to Portugal for the Evangelical Alliance Mission of Wheaton, IL. She was a missionary to Portugal for 42 years, retiring in 1985. She was an accomplished pianist. She gave piano lessons and held recitals for several years. She was a member of the United Methodist Church in New Holland where she taught Sunday School, played the piano, and was active in several church activities and organizations. For several years she organized a community program to honor the “World Day of Prayer” in New Holland, IL. In recent years, after a sudden illness, she resided at The Christian Village where she enjoyed taking part in many activities,, including church services and Sunday School.

Survivors include her sister Mildred Struebing and brother James (Joanne) Hawes. She was preceded in death by her parents and three sisters: Helen Betzelberger, Mary Nell Osborn, and Phyllis Blaum.

Memorial donations may be made to the Christian Village or to the United Methodist Church, New Holland.