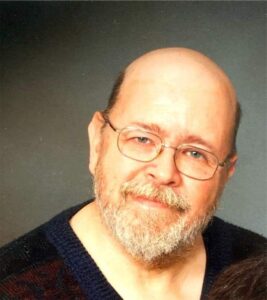 Michael was born March 17, 1952 in Bloomington, IL., the son of Everett Henry “Buzz” Lovell and Doris Irene (Foley) Lovell. He attended Saint Louis College of Pharmacy where he was a member of the Delta Sigma Theta Fraternity. He worked at McKinstry Library on the Lincoln College campus before being hired at Milner Library on the Illinois State University campus where he worked for more than 30 years. He was a voracious reader of all genres, but loved historical novels, history, science fiction, and well written serious mystery. He loved music, especially the blues, 60’s and 70’s and perfected the art of dancing while seated. He had a great baritone singing voice. He had a great sense of humor, was loving, compassionate, and giving. He was a bourbon connoisseur, fishing and tying his own flies, and beating his fishing buddies at poker. Michael was a lifelong bachelor; little kids loved him. He used to tease that only women under 3 ft tall were drawn to him. He was a member of Cumberland Presbyterian Church in Lincoln, Trout Unlimited, American Rivers, and AFSCME. He supported the boy scouts, girl scouts, and veterans organizations, especially Disable American Veterans.

He is survived by his sister Susan Lovell Marley and his best friends and fishing buddies Gregg Messel and Bernard (Buck) Schonoff.

He was preceded in death by his parents and his grandmother Irene Foley, who lived with the family.