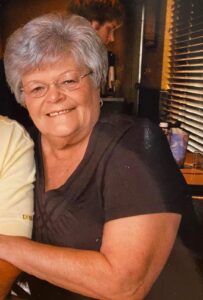 Cremation rites have been accorded by Holland Barry & Bennett Funeral Home. Family services will be held at a later date.

Sandy was born September 20, 1942 in Lincoln, IL., the daughter of William Osborn and Dorothy (Hamer). She married Robert Young on February 16, 1963. They celebrated 57 years of marriage.

Memorial donations may be made to the American Lung Association.