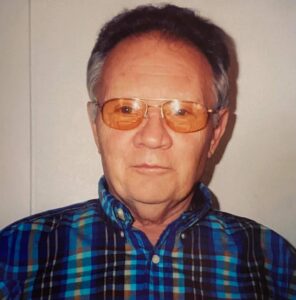 William Richard “Dick” Owens passed away peacefully in the ALMH in Lincoln on December 5, 2020 at 9:40 AM. Cremation rites have been accorded by Holland Barry & Bennett Funeral Home.
Dick was born on January 8, 1938 to James and Lola Owens of DuQuoin, Illinois. Both parents tragically died in 1949. Dick was eleven years old and he and his two older sisters went to live with their maternal grandparents, William Irvin and Maggie Eakin and their Aunt Myrtle Eakin. They ALL lived together in a four-room house in the countryside. Grandpa’s faith and outlook on life was, “GOD WILL PROVIDE”. And HE always did.
Dick attended a one-room, one-teacher school through 8th grade and went on to graduate from DuQuoin High School in 1955. On May 13, 1961 Dick married Dana Louis. They had one beautiful daughter, Fadra Mone. She cost $8.25…. born in Anniston, Alabama where Dick served his country in the U.S. Army, the 82nd Airborne, between 1958- 1962.
Dick lived in Clinton, Illinois and worked for the Illinois Central Railroad for almost 30 years and retired. He also lived in Wapella and Kenny. He was a Deputy Sheriff in DeWitt County for ten years and retired. He moved to Lincoln in 1998. He became a driver for Abraham Lincoln Memorial Hospital’s CARE-A-VAN service for five years and then finally, really retired!!
In by-gone days Dick was a man of many talents. He trapped and skinned game for pelts, hunted ginseng in the woods and eagerly anticipated “deer seasons” each year… bow; pistol; shotgun….he was ‘Johnny on the spot’!
Dick loved woodworking…refurbishing antique furniture or reclaiming old barn wood and beams. Many houses, past and present, have his carpentry talent on display.
He got his first Harley Davidson motorcycle at age 38. He did a solo road trip and travelled thru 47 continental States. He was an avid gardener and a pro at canning the produce. He cut down and chopped up many old trees for firewood, using an axe, wedges and a heavy maul.
Dick met Deborah Hoyt in 2002 after she had moved from Africa to Lincoln. They were married in 2005. Dick like to brag that Deb never found Tarzan in Africa, but she got a “Mountain Man” instead!
Dick was blessed with a loving family, many good friends and a lifetime of wonderful memories His greatest love in life was for his Savior, Jesus Christ. Dick never met a stranger and many people that he met on life’s highway were touched by his evangelistic heart. He always spoke up and stood up for truth and godliness—like it or not! Anyone who ever met Dick, would not forget him.
He was a member of Faith Assembly Church of God in Lincoln, but he enjoyed fellowship with many Christian friends in other area churches too. God’s family was his family – no matter where.
Dick lived a full, exciting life. He always credited God’s goodness for living 82 years! He may have lost the 24-month battle with esophagus cancer, but he won the victory in Jesus and a crown of life! He was truly ready to “go home”! Hallelujah!

There will be a private cremation and interment in the DuQuoin area where his parents are buried. A “Celebration of Life” Service will be held at Faith Assembly in Lincoln on January 9th, 2020 at 11:00 AM.