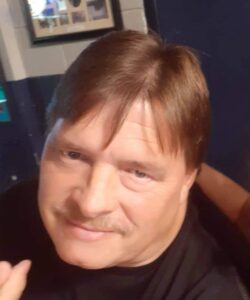 Scott Alan Hanks, 55, of Lincoln, passed away October 10, 2021 at Heart of Mary Hospital, Champaign, IL.
Cremation rites have been accorded by Holland Barry & Bennett Funeral Home. There will be no services at this time.

Scott was born March 4, 1966 in Peoria, IL., the son of Robert L. Hanks and Janice O. (Peto) Hanks. He married Jennifer Harris on December 7, 2011.
He was employed by Nestle/Libby’s in Morton as a pumpkin picker for 20 years. Scott enjoyed shooting, motorcycles, boating, fishing, BBQ’s and parties with friends and family, music, and his dog.

He was preceded in death by his grandparents, parents, and uncle Jay.

Memorial donations may be made to the family to help with funeral and medical expenses.