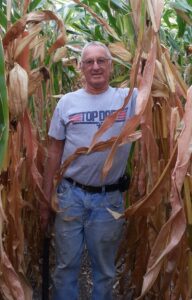 Cremation rites have been accorded by Holland Barry & Bennett Funeral Home. Graveside services will be held at a later date in Bethel Cemetery.

He was born October 7, 1933 in Emden, IL., the son of Joseph Beryl Wagoner and Doris (Hoerr) Wagoner. He married Glenda Kennedy on May 1, 1955. She preceded him in death on June 9, 2008. Bill proudly served his country in the United States Army during the Korean War. He was a member of the Emden American Legion Post 506. He served on the elevator board, Emden Fire and Rescue board as a trustee, was township supervisor, and was on the Patrons Mutual Board. He attended St. Peter’s Lutheran Church in Emden. Bill loved sprint car and drag car racing. He was full of life and fun and didn’t know a stranger. He was affectionately known as “Pee Po” and loved spending time with his grandchildren.

He was preceded in death by his parents and his wife Glenda.

Memorial donations may be made to the Bethel Church Fund , Emden Fire and Rescue, or to the Emden American Legion Post 506 and will be accepted at the funeral home.