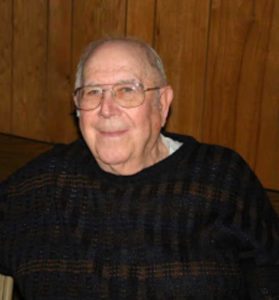 Charlie was born January 5, 1929 in Riverton, IL., the son of Vivian V Mann and Caroline (Barni) Mann. He married Rose Marie Gorman June 25, 1955. She preceded him in death March 28, 2015. Charlie was a 1947 graduate of Riverton High School. He was employed at Weaver’s Manufacturing after graduation until he was drafted into the Army during the Korean War. He served his country in the artillery and was the sergeant in charge of a 105 Howitzer. He fought in the Iron Triangle in 1951 and served at Camp McCoy in 1952. He then served in the reserves until 1956. He received the UN Service Medal, The Korean Service Medal, and three battle stars. After his military service he returned to work at Weaver’s until 1973 and later worked for Precision Products from 1974 until his retirement in 1991.
He has been a member of Blessed Sacrament for over 60 years. He has been a member of the Knights of Columbus Council #4179 in Chatham for over 54 years and is an honorary life member and Springfield Chapter Hall of Fame Member. He was also a member of the Spring River Hunting and Fishing Club. Charlie recently got to go on the Honor Flight with the Land of Lincoln Chapter. In his spare time he enjoyed fishing, hunting, and vacationing with his family at his favorite spot on Lake Alice in Tomahawk, Wisconsin.

Surviving are his son Stephen (Laurie) Mann of Springfield; daughter Angie (Chris) Wollesen of Springfield; daughter in law Beth Mann of Linthicum Heights, Maryland; 8 grandchildren; 6 great grandsons; and several nieces, nephews, cousins, and friends.
He was preceded in death by his parents, his wife Rose, his son Thomas Mann, sister and brother in law Mary & Fritz Bennett, and sister and brother in law Vivian “Babe” and Mike Steele.

Memorial donations may be made to the Land of Lincoln Honor Flight.