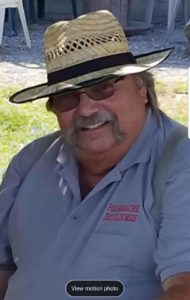 Visitation will be from 11 AM until 1 PM Saturday, June 15, 2019 at Holland Barry & Bennett Funeral Home. Funeral services will follow at 1 PM with Pastor Steve Blaum officiating. Burial will follow in Richmond Grove Cemetery, New Holland.

Kenny was born February 17, 1954 in Lincoln, IL., the son of Harold and Wilma (Towles) Harnacke. He married Carla Biedenharn on September 29, 1974 in Mason City, IL. He was a member of the First Cumberland Presbyterian Church, Lincoln. He was the owner of Harnacke Buildings and was a talented carpenter. He also enjoyed woodworking and had his own craft shop, the Country Peddler. He was a proud member of the Antique Tractor and Small Engine Club. Kenny was the organizer and host of the July Tractor Drive and the Memorial Tractor Show. He was also the organizer of the New Holland Christmas Parade. He enjoyed tractor shows, collecting tractors, and spoiling his grandson and grand dogs.

He was preceded in death by his parents and his brother Jerry Harnacke.