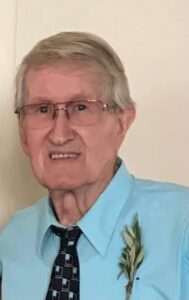 William was born October 31, 1931 in Lincoln, IL., the son of Herman F. Rieman and T. Rose (Koller) Rieman. He married Donna J. Van Bibber on July 3, 1959.
Bill retired from PPG as a supervisor. He enjoyed woodworking, gardening, and music. He loved his schipperke dogs Little Bear, Katie, and Sadie. He never had a bad word to say about anyone and everyone that met Bill loved him. He and Donna enjoyed watching Swaggart Ministries together.

He was preceded in death by his parents and his brothers Richard “Dick” Rieman and Ronald Rieman.